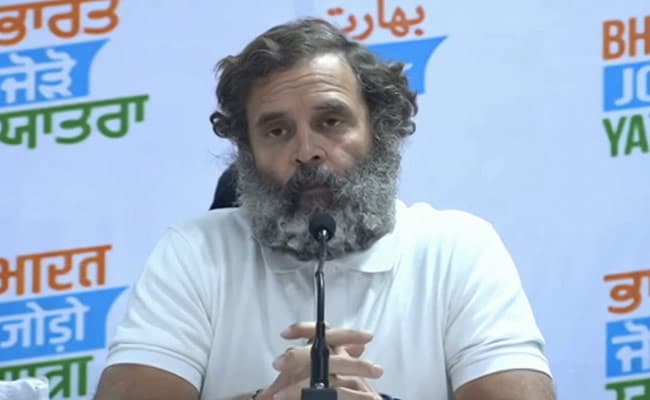 Rahul Gandhi said Digvijaya Singh’s views were not those of the party.

“The party’s views emerged from a conversation. Digvijaya Singh’s views are outlandish views. They are not the party’s views. We know very well – the Armed Forces are doing a job and they are doing it very well. They No evidence is required,” the congressional leader said.

“They talk about surgery – we killed so many people. But there is no proof. They rule by peddling a bunch of lies,” Mr Singh said.

Congress tried to contain the damage, saying the remarks did not reflect the views of the party.

Mr Singh also said: “I have a lot of respect for the Defense Force”.

But the BJP seized on the comments, slamming him and Congress for questioning the army as “anti-national”. The party also demanded an apology from Rahul Gandhi.

“Congress leaders are doing Bharat Todo (dividing India) as directed by Rahul Gandhi. Digvijaya Singh has become a symbol of vicious rhetoric. Trust in the army is unbreakable and above politics. If the army says there is a surgical strike , how can you repeatedly ask for evidence. This shows that you have no confidence in our army,” BJP spokesman Gaurav Bhatia said.

“Irresponsible remarks have become a feature of Congress. But if they speak against the Indian Army, that will not be tolerated. It appears that Rahul Gandhi and Digvijaya Singh have been They are blinded by their hatred of Narendra Modi,” said the BJP leader.

In 2016, India launched a surgical strike after 18 soldiers were killed in a terrorist attack at the Uri military base in Jammu and Kashmir.

The February 2019 Pulwama attack on a security convoy was blamed on the Pakistan-based terrorist group Jaish-e-Mohammad.

Days after the attack, India retaliated with an airstrike on Balakot, Pakistan, followed by aerial dogfights between the neighbors.