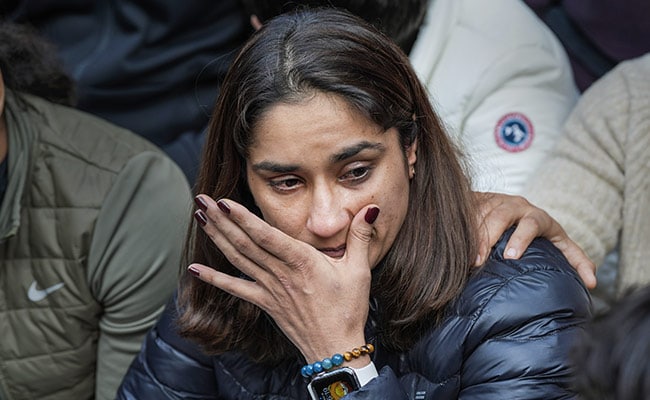 The sports ministry has sought the Wrestling Federation of India (WFI) after top wrestlers including Olympian Vinesh Phogat, Olympic medalist Bajrang Punia and Sakshi Malik accused the sports body’s coach and chairman Brij Bhushan of serious misconduct. Respond within the next 72 hours” Sharan Singh. Vinesh Phogat, the first Indian female wrestler to win gold medals at both the Commonwealth Games and the Asian Games, said, “Over the years, national coaches have molested female wrestlers and received death threats from WFI officials.” Other top Indian wrestlers staged a massive protest at the Jantar Observatory in New Delhi. Wrestlers call for removal of WFI president.

In a statement, the center made it clear that if the WFI did not respond within the next three days, the sports ministry “will take action against the federation in accordance with the provisions of the National Sports Development Act 2011.”

“Considering today’s protests in Delhi by wrestlers, including Olympic and CWG medalists, and the serious allegations made by wrestlers against female wrestlers by the President and coaches of the Wrestling Federation of India (WFI) in a press conference. And mismanagement in the operations of the federation, the sports ministry has sought an explanation from the WFI and has directed it to respond to the allegations made within the next 72 hours. In communication with the WFI, the ministry stated that “since this matter concerns The wellbeing of athletes, the ministry has taken the matter very seriously. ’” the sports ministry said in a statement.

“The ministry further stated that if WFI fails to respond within the next 72 hours, the ministry will take action against the federation under the provisions of the National Sports Development Act 2011.”

World Championship medalist and Olympian Vinesh also claimed that several coaches at the Lucknow National Training Camp exploited female wrestlers, adding that some women in the training camp approached wrestlers at the request of the WFI president.

“Some of the coaches are very close to the national federations. Those coaches are exploiting young girls. It’s not known how many young girls are suffering because of it,” Vinesh said.

While clarifying that she has not faced such exploitation herself, the 28-year-old claims she has received death threats from officials close to him at the request of the WFI president for daring Prime Minister Narendra Mohamed Narendra Modi noticed several issues plaguing India after the Tokyo Olympics when she met him in wrestling.

“I know at least 10-20 women wrestlers who told me about the sexual exploitation they faced at the hands of the WFI President. They told me their stories. I can’t get their names right now but I can definitely reveal if we can meet To the prime minister and home minister of the country, I will name them,” Vinesh told the media after a four-hour “dharna” at Jantar Mantar.

Tokyo Olympic bronze medalist Bajrang Punia, who sat next to Vinesh, said the way the federation was run was arbitrary and they would not participate in any international competitions unless the WFI president was removed. “Our fight is not against the government or the Sports Authority of India (SAI). It is against the WFI.”Yeh ab aar paar ki ladai hai’ (It’s a fight to the end). We will continue to protest until the WFI president is removed,” Bajrang Punia told news agency PTI.

WFI Chairman Brij Bhushan Sharan Singh has responded to the allegations. “I came here as soon as I knew the wrestlers were protesting, can anyone on record say the feds molested us?” he said at a news conference. “If you have a problem like this with the federation, why hasn’t anyone raised it for 10 years? As long as the rules are set, the problem will arise.”

“The accusations against me by wrestlers are unjustified and even if a case of sexual harassment is proven, I am ready to be hanged,” added WFI President Brij Bhushan. “I will not resign as WFI chairman, but I am ready to be investigated by CBI or police.”

“An industrialist is behind this plot against me. Why doesn’t Vinesh go to the police when he receives death threats,” he further claimed.

“NCOE Lucknow’s Executive Director has been directed to provide all facilities for the reported and likely reported national campers until the campers leave the centre. Necessary information regarding the cancellation of the national coaching camp has also been sent to all campers”