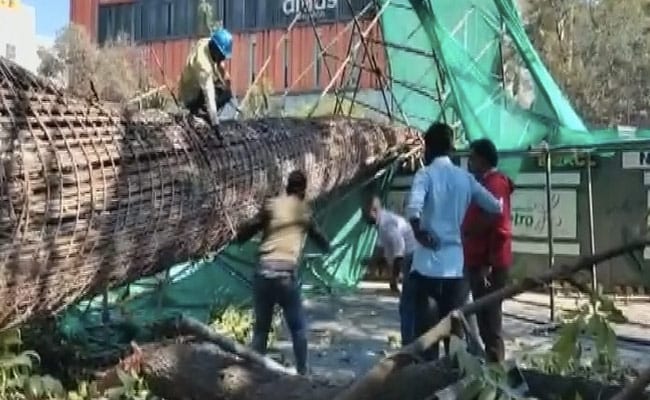 The family of a woman who died on Tuesday after a subway pillar under construction in Bengaluru collapsed has recounted the horrific moment on camera.

A woman and her toddler have died in the crash, while her husband and daughter have been taken to hospital with injuries.

Lohit, the husband of the woman killed in the incident, said he had lost everything. He expressed his grief over the accident and urged the government to ensure such incidents never happen again.

Recounting the incident, the husband said: “We were traveling in a two-wheeler and I was supposed to drop them off at a relevant place and go from there. But this happened in a fraction of a second. When When I looked back, my wife and children were gone, and I had nothing in my hand.

He asked the government to take safety measures and precautions to avoid any such incidents in the future.

“What should I tell the government, I’ve lost everything. The government should just make sure that such incidents don’t happen in the future. All safety and precautions should be taken so that others don’t have to face this situation,” he said.

The deceased’s father, Madan Kumar, demanded that the construction work be canceled and said he would not take his daughter’s body until the contract was cancelled.

“Until the contractor’s license is not cancelled, I will not take the body. Who allowed them to build such a tall column? The tender should be cancelled, the work should be stopped. I will see what to do in court,” he said.

Nirmala, the mother-in-law of the deceased, said: “She came to Bangalore 10 days after returning from Davanagrey. She went to drop off her children at school. This happened around 10.30am. We are very angry about this incident and we Justice is to be served. No superiors were present.”

The father-in-law of the woman killed in the incident, Vijayakumar, said that the contractor responsible for the construction of the pillars of the Bangalore subway did not take safety measures. A pillar of the subway under construction in Bangalore collapsed and claimed two lives.

In an interview with ANI, Vijayakumar, the father-in-law of the deceased, demanded that the construction be stopped immediately.

“The contractor responsible for the construction of the subway pillar clearly failed to take safety measures. Construction activities should be stopped immediately because it is operating under unsafe conditions,” he said.

“If a bus or other passenger vehicle crossed that point, there could be more casualties. Our world has been destroyed. I ask the government to take safety measures at construction sites,” Vijayakumar added.

Meanwhile, Chief Minister Basavaraj Bommai on Tuesday announced an ex-gratia payment of Rs 1 million for relatives of those who lost two lives in the Bengaluru subway pillar accident.

Bommai told reporters he was already looking for details of the accident.

“This is a very unfortunate incident. An investigation was ordered to find out any lapses on the part of the contractor or otherwise. An ex-gratia payment of Rs 1 million will be given to the family of the deceased,” he said.