Flyer crouches under seat, child cries amid gunfire outside 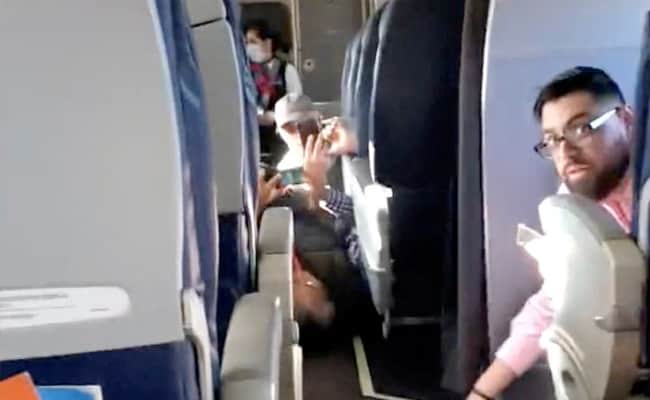 Aeromexico officials said no one on board was injured.

“That’s an attack plane, Dad,” said one of David Tellez’s young children as they watched the Mexican military plane land with their Aeromexico airliner early Thursday.

Then the gunfire started.

“As we accelerated to take off, we heard gunfire very close to the plane and that’s when we all fell to the ground,” Tellez said after the accident in the northern city of Culiacan.

It’s incredible. An Aeromexico plane was hit by a bullet fired by a cartel member on the tarmac in Culiacan.

Passengers lie on the floor.
pic.twitter.com/ayuQ4R0Eus

Violence erupted across Culiacan on Thursday after the arrest of Ovidio Guzman, the son of notorious drug lord El Chapo and a senior member of the Sinaloa cartel.

Aeromexico said no one was injured on Tellez’s flight. Culiacan’s airport was closed shortly afterwards as security forces patrolled the city, which was littered with burned vehicles, in an attempt to contain a violent backlash.

Tellez, 42, was traveling with his wife and children aged 7, 4 and 1 after spending Christmas with his family.

He told Reuters he had made it to the airport for his 8:24 a.m. flight despite road closures following the overnight shootout. While Guzman’s arrest has not been confirmed, nervous security guards urged travelers to move in quickly.

“The authorities haven’t said anything,” he said by phone.

Telles and his family hid in an airport restroom after hearing gang members were at the airport. The rumors proved false and Aeromexico passengers were quickly boarded.

However, just as flight AM165 to Mexico City was about to take off, a military plane landed on the airport runway one after another.

A video circulating on social media that appears to document the same incident shows passengers crouching under their seats and a child crying.

A flight attendant said the engine had been hit, causing a leak. The crew guided the passengers off the plane and transferred them to the windowless waiting room at the airport.

It was not immediately clear who was shooting whom.

Tellez’s family planned to board another flight on Friday, but until then, they were not moving.

“We’d rather stay at the airport until it’s safe to leave,” he said. “The city is worse. There’s a lot of shooting and chaos.”