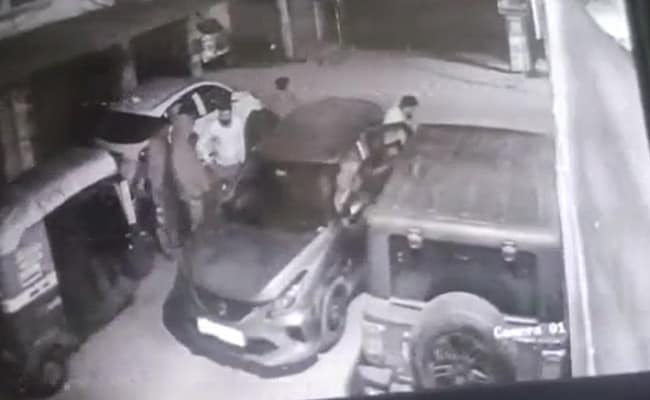 CCTV footage showed the men fleeing in a car about two hours after the incident.

Two new suspects have emerged in New Delhi’s car terror after a 20-year-old woman died after being dragged 13 kilometers by a car in the early hours of New Year’s Day.

Police today identified the two men as the owner of the car, Ashutosh, and the brother of one of the defendants, Ankush, and claimed they would be arrested soon.

“In addition to the five men who were detained, there were two more involved. We have scientific evidence. They were trying to cover up the person who committed the horrific crime,” Senior Constable Sagarpreet Hooda said.

Among those arrested hours after the incident were Deepak Khanna, Manoj Mittal, Amit Khanna, Krishan and Mithun.

Investigations revealed that the vehicle was driven by Amit Khanna, not Deepak Khanna as previously believed.

Mr Hooda said Amit did not have a driver’s licence.

“The defendants conspired to cover up the crime. They knew Anjali’s body had been dragged away. This was a horrific incident and we are working hard to gather evidence to bring justice to Anjali.”

Anjali Singh and her friend Nidhi on a motorbike hit her just after 2am. Anjali had her leg caught in one of the wheels and she was dragged away by the car. She screamed, but the car didn’t stop, even though occupants saw her arms under the wheels. The men drove for more than an hour before the body fell.

Security footage shows the men returning the car to its owner, Ashutosh, about two hours after the incident, before fleeing in a motorized tricycle.

CCTV footage from Rohini showed the men parked their cars at a location and left at 4.33am in a waiting auto-rickshaw.

An autopsy revealed that Anjali died of horrific injuries. She had suffered at least 40 traumatic injuries; her ribs were protruding from her back, the base of her skull was fractured, and some “brain matter was missing”. She suffered injuries to her head, spine and lower limbs.

Mr Hooda was also asked about the police’s alleged slow response to calls alerting them to a car dragging a body. “An internal investigation is underway to determine if this was human error or if there was an issue with the process so improvements can be made. Action will be taken when the investigation is reported,” the officer said.