Was Tunisha Sharma forced to wear a hijab? Sheezan Khan’s family has this to say – Flying Journals
Skip to content
Uncategorized

Was Tunisha Sharma forced to wear a hijab? Sheezan Khan’s family has this to say 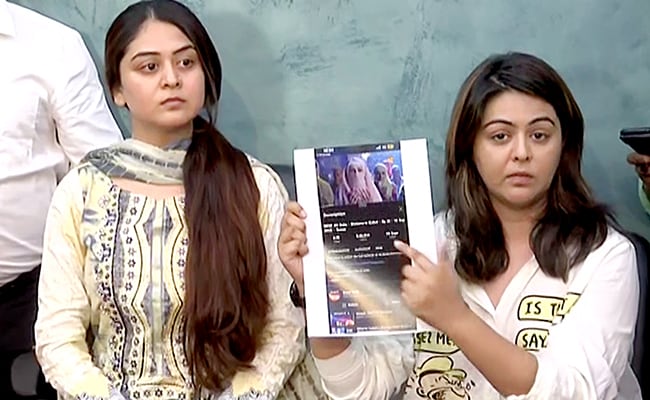 Actor Sheezan Khan’s family claimed Monday that he was framed in co-star’s death Tunisha Sharma by the latter’s mother. At a news conference, Mr Khan’s mother and two sisters said Ms Sharma was “like family to them” and claimed the victim’s mother used to force her to work even though she wanted to enjoy life.

Ms Sharma, 21, who plays a role in the show “Alibaba: Dastan-e-Kabul”, was found hanged on December 24 in the washroom of an episode of the series near Vasai, Palgar. Mr. Khan was arrested on 25 December for abetting suicide.

Tunisha Sharma’s mother, Vanita Sharma, said last week her daughter’s death may have been a murder and accused Mr Khan and his family of trying to force her daughter to convert.

She also claimed that Ms Sharma checked Khan’s phone and discovered he was chatting with other women on WhatsApp, with whom Khan had recently been in a relationship.

Vanita Sharma claims that when Ms Sharma confronted Mr Khan about it, he slapped her.

Responding to the allegations, Mr Khan’s sister, Falaq Naaz, who is also an actress, said Ms Sharma was “like family to them”. Ms Naaz said Ms Sharma and her mother had visited their home several times. “We never force anyone to do anything,” she said.

Mr Khan’s mother said Ms Sharma’s mother should give evidence for the allegations she had been making against him.

Regarding the allegation that Mr Khan slapped Sharma once during filming, the accused actor’s mother asked: “Why didn’t Vanita Sharma complain to us or slap Sheezan?”

“We also want justice for Tunisha, but it is not true that her mother tried to wrongly implicate Sheezan in this case,” she said.

“We decided to surprise Tunisha on her birthday on 4th January. Her mother also knew she was like our little sister. We spent about six months with Tunisha and she enjoyed it and we are proud of it ,” Ms Naaz said.

Regarding the allegations that Ms Sharma was forced to wear a hijab and visit the dargah, she said, “We never asked her to do anything.” Another sister of Mr Khan mentioned a photo of Ms Sharma wearing a hijab had gone viral, It is claimed that the actor wore a hood while filming.

“We just want to say that Tunisha is like family to us and we’ve been taking care of her,” she said.