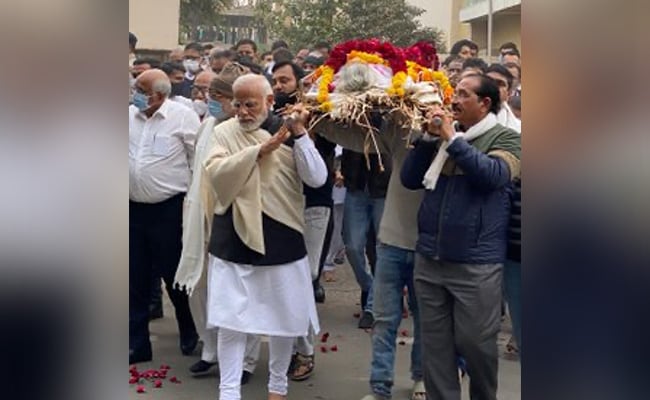 “A century of glory is at the feet of God…In Maa I have always felt a trinity that encompasses the journey of the ascetic, the symbol of selfless Karmayogi and a life committed to values,” the prime minister posted in a message Mourning the news of his mother’s death from the bottom of my heart.

Prime Minister Modi, who was due to visit West Bengal to start a series of projects, arrived in Gandhinagar. The Prime Minister’s Office or PMO tweeted that he will attend a scheduled program in Bangladesh today via video conference.

The 72-year-old prime minister was seen carrying his mother’s coffin. The body was then loaded into an ambulance into which the prime minister climbed.

“We thank everyone for their prayers during these trying times. We humbly ask everyone to keep their lost souls in their hearts and to continue with their pre-determined timelines and commitments. This will be a fitting tribute to Hiraba,” A family source told NDTV.

Heeraben used to live with PM Modi’s younger brother, Pankaj Modi, in Raysan village near Gandhinagar. During his visit to Gujarat, the Prime Minister regularly visited Raysan and spent time with his mother.

In June this year, PM Modi blogs on her 99th birthdayIn the blog, the prime minister writes about aspects of his mother’s life that “shaped his thinking, personality and self-confidence”.

“This year will be her centenary. If my father was still alive, he would have celebrated his 100th last week. 2022 is a special year because my mother’s centenary is about to begin and my father will Finish his,” he wrote in a blog post.

In a blog post, the prime minister said his mother had an extremely difficult childhood compared to his, adding that she had always been distressed by the loss of her mother at an early age.

“Mother used to wash dishes at several households to help maintain the household expenses. She would also find time to supplement our meager income by spinning cloth,” the Prime Minister wrote, recounting the family’s hardships in the early years.

“Whenever I visited her in Gandhinagar, she would hand me sweets. Like a doting mother to a child, she would take out a napkin and wipe my face once I finished eating. She always had a A napkin or small towel tucked into her sari,” the prime minister wrote, emphasizing his mother’s focus on cleanliness, adding that “she was very particular about the bed being clean and well made”.