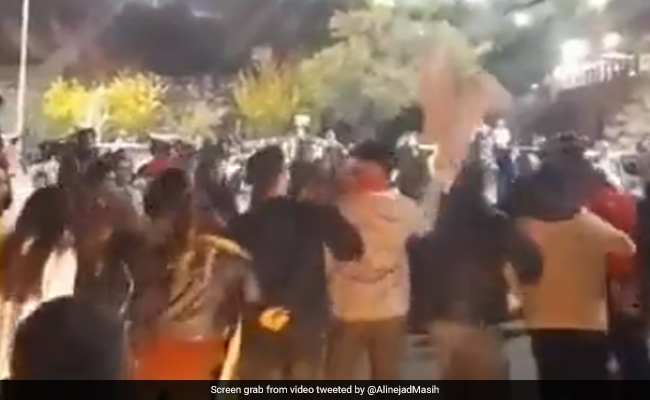 Protests have since swept across the country, challenging the authority of the government.

The Iranian soccer team’s loss to the United States at the FIFA World Cup on Wednesday sparked unusual celebrations in their home country, in stark contrast to the reaction expected after a loss for any national soccer team.

Scenes of jubilation on the streets of Iran have been widely shared on social media as the country descends into protests and continues to sever ties with a football team they believe is part of the authoritarian regime.

Iran is a country where people love football very much. Now they take to the streets of Sanandaj to celebrate their soccer team’s loss to the US.
They don’t want the government using sport to regulate its murderous regime.pic.twitter.com/EMh8mREsQnpic.twitter.com/MqpxQZqT20

Videos shared on Twitter showed Iranians doing a rare dance in the streets after videos of burning tires and protesting crowds emerged in the country in recent months. But the dancing and celebratory honking was also a form of protest as they condemned football teams to the World Cup at such a tumultuous time.

Celebrate in a Kurdish-Iranian city #Kamyaran Because the regime’s national team lost the game to the United States #World Cup.

Tonight, people all over Iran are celebrating.our #IranRevolution stronger. Iranians want this regime to go.#MahsaAminipic.twitter.com/vdgBn0h7cX

Protests over Mahsa Amini’s death have rocked the country since September, killing more than 300 people, including children. On September 16, Mahsa Amini was killed in police custody by Iran’s notorious morality police for not wearing her hijab properly.

In Mahsa Amini’s hometown of Saqez and several other Iranian cities, citizens celebrated with fireworks. The London-based Iran Wire website said on Twitter: “The citizens of Saqez started celebrating and using fireworks after the US’s first goal against the Iranian football team.”

“Who would have thought I’d jump three meters and celebrate Team USA’s goal!” Iranian game journalist Saeed Zafarany tweeted after the loss. Podcaster Elahe Khosravi also tweeted: “This is the benefit of playing in the middle. They lose to the people, opponents, and even” the government.

Surrealism: Fireworks Reportedly From Saqqez #Iran Celebrating Team USA’s victory over Iran in the World Cup tonight.Sacks is #MahsaAminiHometown of the woman whose death sparked mass protests against the regime pic.twitter.com/1qoXxmBkfK

Protests have since swept across the country, challenging the authority of the government.

In their own protest, the Iranian football team refused to sing the national anthem ahead of their opening match against England on November 22. While some see the insurgency as brave, many Iranians still say the football team does not represent the Iranian people, but the government.