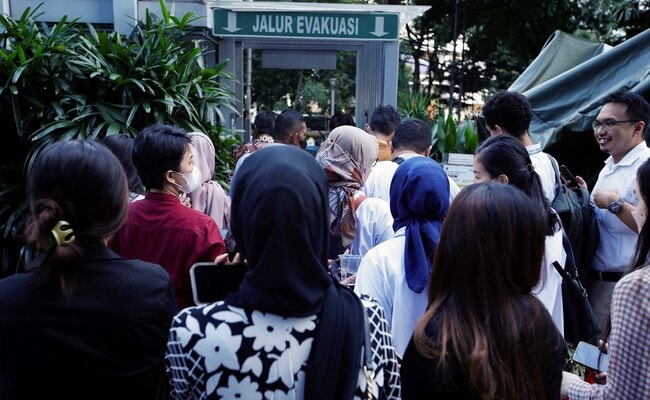 The earthquake was concentrated in the Zhanzhu area of ​​West Java.

The quake, which was epicentered in the Cianjur district of West Java province, was felt as far away as the capital Jakarta, sending panicked residents into the streets, according to the US Geological Survey.

“The latest figures show that 46 people were killed. The victims continued to come from many districts. About 700 people were injured,” Herman Suherman, the administrator of the town of Cianjur in West Java province, told broadcaster Kompas TV.

He said as many as thousands of homes could have been damaged in the quake.

The local administrator of the town hardest hit by the quake said most of the deaths were counted at just one hospital, but did not provide specific figures, and many others in surrounding villages still had to be evacuated.

“The information I have so far is that in this hospital alone, almost 20 people have died and at least 300 people are being treated,” Herman Suherman told broadcaster Metro TV.

“Most of them had fractures from being trapped by the rubble of the building.”

The broadcaster showed several buildings in Chanjul with their roofs collapsed and streets lined with debris.

Relatives of the victims had gathered at the town’s Sayang Hospital, Sukhman said, warning that the death toll could rise as villagers outside the town may still be trapped.

“We are currently dealing with people in emergency at this hospital. Ambulances are constantly going from the village to the hospital,” he said.

“There are still many families in the village who have not been evacuated.”

The country’s disaster chief, Suharyanto, also named, said at least 14 people had died in the Cianjur region, but said information was “still developing”.

Cianjur police chief Doni Hermawan told Metro TV authorities had rescued a woman and a baby from the landslide but a third person they found had died from his injuries.

The country’s meteorological agency warned residents near the quake to watch out for more shaking.

Dwikorita Karnawati, head of Indonesia’s meteorological agency, told reporters: “We appeal to people to stay outside buildings for the time being because aftershocks may occur.”

The US Geological Survey earlier reported the quake had a magnitude of 5.4.

There were no reports of casualties or major damage in Jakarta.

Mayadita Waluyo, a 22-year-old lawyer, described how panicked workers fled through the exits of their building in Jakarta when the quake struck.

“I was working when the floor beneath me was shaking. I could clearly feel the tremor. I tried not to do anything to deal with it, but it got stronger and lasted for a while,” she said.

“I’m a little dizzy right now, and I’m getting a little cramp in my legs because I’m going down from the 14th floor.”

An AFP correspondent said hundreds of people waited outside after the quake, some wearing hard hats for protection from falling debris.

Due to its location on the Pacific “Ring of Fire”, where tectonic plates collide, Indonesia is often subject to earthquakes and volcanic activity.