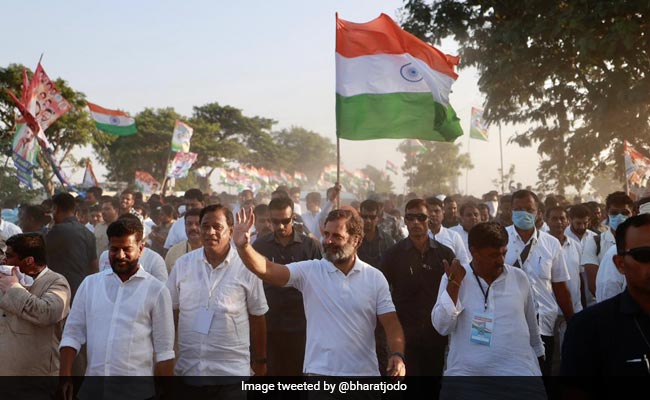 “Rahul called me at night even though he was busy with Bharat Jodo Yatra,” Sanjay Raut said.

“Rahul called me at night even though he was busy with Bharat Jodo Yatra. He inquired about my health and said ‘we are worried about you’. Only if a political ally was framed in a bogus case would that be Feeling sad, tortured in jail for 110 days,” Sanjay Raut tweeted in Marathi.

He published a longer article in English.

“Although opinions differ widely on some issues, it is a sign of humanity to ask your political colleagues… such gestures are becoming less and less common in times of political bitterness.” Rahulremember Focused on love and compassion in his yatra so it got a huge response,” Mr Raut wrote.

Rahul Gandhi’s gesture and the Sena leader’s public praise mark the mending after the Thackeray team warned that his comments on Veer Savarkar – the Hindu icon – could affect their Maharashtra union.

Last week, Rahul Gandhi, who was attending a Bharat Jodo Yatra event in Maharashtra, criticized Veer Savarkar for begging for mercy from the British in prison. He also accused him of turning to the British and betraying leaders such as Mahatma Gandhi, Jawaharlal Nehru and Sardar Patel.

Comments directed at an icon revered in Maharashtra have angered two factions in Shiv Sena.

Uddhav Thackeray said his party had “great respect” for Savarkar, Sanjay Raut told NDTV: “The issue of Savarkar is important to us and we believe in his ideology. They (Congress) should not have raised the issue.”

Another leader of the party went a step further, issuing a clear warning. “Sanjay Raut issued a statement that we may not continue with the MVA (Maha Vikas Aghadi Alliance). This is a serious reaction from the party,” Sena MP Arvind Sawant said on Friday, suggesting that Uddhav Thackeray “will issue a statement soon”.

In a damage control attempt, Congress leader Jaram Ramesh said Rahul Gandhi was simply stating historical facts. “I spoke to Sanjay Raut today. We agreed to disagree. He dismissed the impression that it will weaken Maha Vikas Aghadi. It will not affect MVA,” he said on Friday.