“This is a kidnapping of democracy, not just of a candidate,” Manish Sisodia claimed.

Arvind Kejriwal’s Aam Aadmi Party (AAP) today claimed that one of its candidates in Gujarat was “kidnapped”, dragged to the election office and forced at gunpoint to withdraw its nomination for next month’s election. The party blamed the ruling BJP for yet to respond to the allegations and protested outside the offices of the Delhi Election Commission.

In a blizzard of tweets, AAP leaders claimed that the party’s Surat (Eastern) candidate, Kanchan Jariwala, was “kidnapped” by the BJP yesterday. 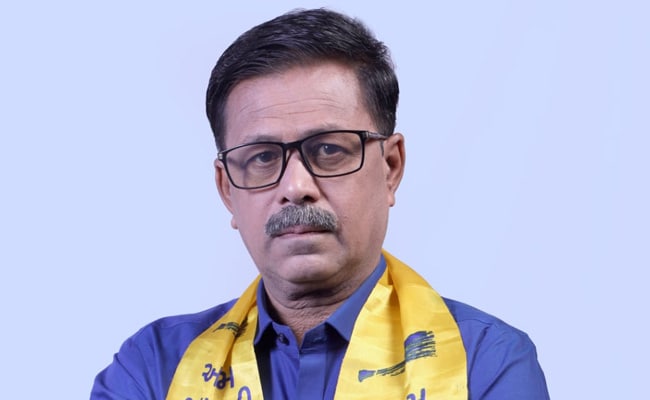 Shortly after the kidnapping tweet was posted, video emerged of the candidate, apparently in an elections office, with police next to him.

“He’s under pressure to withdraw his nomination. He’s been forced to sit at the polls and he’s been pressured by the police. I want to tell the Election Commission that this is an open threat to democracy,” Mr Sisodia said.

Another AAP leader, Raghav Chaddha, released a dramatic video of what he called Mr Jariwala being “dragged” and forced to withdraw his nomination.

“Look at how the police and BJP thugs have joined forces – dragging our Surat East candidate Kanchan Jariwala to the RO office to force him to withdraw his nomination. The term ‘free and fair elections’ has become a joke!” he tweeted .

The phrase “free and fair elections” has become a joke! pic.twitter.com/CY32TrUZx8

Mr Sisodia said the BJP was “panicking” that it was about to lose Gujarat and resorted to kidnapping the AAP candidate.

The AAP said Kanchan Jariwala and his family disappeared yesterday while they went to review his nomination papers. “The moment he left office after his nomination was vetted, the BJP thugs took him,” said Mr Sisodia, deputy chief minister of Delhi and AAP’s No. 2 leader.

“It’s dangerous. It’s a kidnapping of democracy, not just of candidates,” he claimed.

“Our candidate from Surat (East), Kanchan Jariwala and his family have been missing since yesterday. First, the BJP tried to get his nomination rejected. But his nomination was accepted. Later, he was forced to Withdrawing the nomination. Has he been kidnapped??” Arvind Kejriwal tweeted.

Our candidate Kanchan Jariwala from Surat (East) and his family have been missing since yesterday. First, the BJP tried to get his nomination rejected. But his nomination was accepted. Later, he was forced to withdraw his nomination.

Has he been kidnapped?

The BJP, which has ruled Gujarat for 27 years, faces an aggressive challenge from the AAP this time, turning the state’s traditional BJP-congress rivalry into a triangular contest.

Gujarat voted for a new government from December 1-5. Results will be announced on December 8.

The kidnapping allegation overlaps with the BJP’s allegation that the AAP MLA was linked to bribery in exchange for the party’s nomination for the Delhi referendum.

Three men, including a relative and a personal assistant of AAP MLA Akhilesh Pati Tripathi, were arrested yesterday for allegedly taking Rs 1 lakh from a would-be party worker. Another AAP MLA, Rajesh Gupta, has also been named and Delhi Police claim to have audio and video evidence.

The BJP said the case “revealed the true face of the AAP once again”.