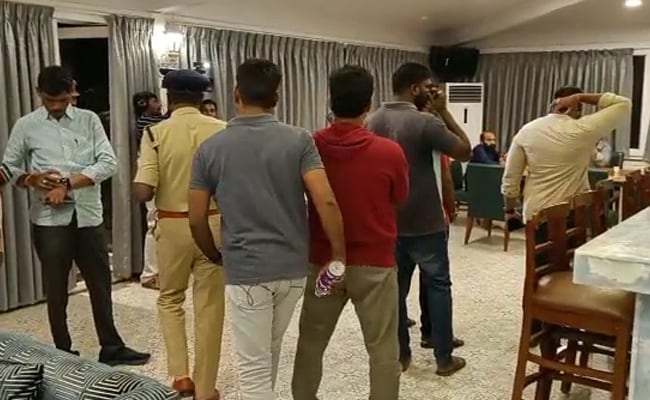 The deal was brokered at one of the MLA’s farmhouses.

On Wednesday, police claimed to have detained three people suspected of bribing four MLAs of the state’s ruling TRS to change their positions. A key leader was offered a bonus of up to Rs 1 billion in negotiations at a farmhouse, police said late last night.

Police chief Stephen Ravindra told NDTV in an exclusive interview that police raided the farmhouse where the “deal” was underway after a possible whistleblower by one of the MLAs of TRS (Telangana Rashtra Samithi).

Sources said each MLA has provided Rs 500 crore on top of Rs 100 crore for key leaders.

Mr Ravindra told NDTV that the MLA had called the police, saying they were “lure and bribed to change parties”. “They said they got big money, contracts and jobs to switch parties,” he added.

He added that these people came to Hyderabad under false identities.

One of the priorities, Pilot Rohit Reddy, owns the farmhouse that brokered the deal. He was described as the complainant. The four MLAs were brought to Pragathi Bhavan, the official residence of TRS chief, Chief Minister K Chandrashekhar Rao.

Since 2019, it has been claimed that the BJP has been trying to launch “Operation Lotus” in Telangana, another southern state where the party has yet to find a foothold.

Operation Lotus is a term used by the opposition to describe alleged bribes of states’ ruling party priorities to join the BJP and overthrow the government.

Events in Maharashtra have fueled that narrative, where the BJP-backed Eknath Shinde rebellion toppled Uddhav Thackeray’s government earlier this year.

Recently, Arvind Kejriwal’s Aam Aadmi party claimed that the BJP was trying to poach its priorities in Delhi and Punjab.

In August, it was reported that a BJP leader claimed that the priorities of about 18 TRS would soon join the BJP.

“It was a drama. The KCR understood the failure of TRS in Munugode. So they orchestrated the drama,” said BJP leader Vivek Venkataswamy.