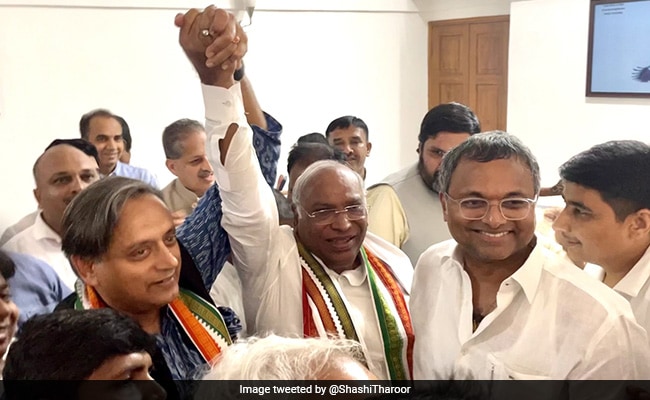 Senior Congress leader Shahi Tharoor, who lost the congressional presidential election, has praised winning candidate Malikajon Harg, saying he believes the party’s revival “really starts today”. He said the new party chairman was a colleague and veteran who “brought a wealth of leadership and experience” and was confident that under Mr Harger’s guidance “we can all collectively bring the party to a new level” the height of”. He also thanked outgoing President Sonia Gandhi for her contribution to the party.

In a statement issued shortly after the results were announced, Mr Tharoor, while congratulating Mr Halger, also thanked his own team of party colleagues “for doing an amazing job of keeping our campaign from being impossible. s hard work”.

Mr Tharoor tweeted: “It has been a great honour and a great responsibility to be President of @INCIndia and I wish @Kharge ji all the best in this task. It is mine to have the support of over a thousand colleagues It is an honour, & the hopes and aspirations of so many well-wishers in the Indian Congress.”

It is a great honor and a great responsibility to be the chairman @INC India &I hope @Kharge ji went well in that task. It is a privilege to have the support of over a thousand colleagues and to carry the hopes and aspirations of so many well-wishers in Congress across India. pic.twitter.com/NistXfQGN1

Shortly after the poll results were announced, Mr Tharoor visited Mr Halger at his residence to congratulate him. He later tweeted: “Called on our new President-elect Mallikarjun Kharge to congratulate him and offer him my full cooperation. Congress has been strengthened by our contest.”

Called on our new President-elect Mallikarjun @kharge Congrats to him and give him my full cooperation. @incIndia Our game has stepped up. pic.twitter.com/fwfk41T93q

Praising Sonia Gandhi, Mr Tharoor said in his statement: “At a pivotal moment in the party’s history and our collective future, we owe outgoing President Sonia Gandhi an irreparable debt as she led for a quarter century of the party and for being our backbone during our most critical time. Her decision to authorize this electoral process to give us a new path to the future is no doubt her wisdom for our party and a proper proof of vision.”

He further said: “I would also like to thank former Presidents Rahul Gandhi and Priyanka Gandhi Vadra for their contributions in supporting free and neutral elections. The Nehru-Gandhi family has and will Party members will always have a special place in Congress’ hearts – and for good reason.”

Thanking the dedicated team of volunteer colleagues who worked for him during the campaign, Mr Tharoor added: “I am especially grateful for the dedicated, idealistic and enthusiastic volunteer team of my party colleagues who have worked under impossible circumstances It’s an amazing effort to keep our campaign going.”