VK Sasikala responds to report blaming Jayalalithaa in her death 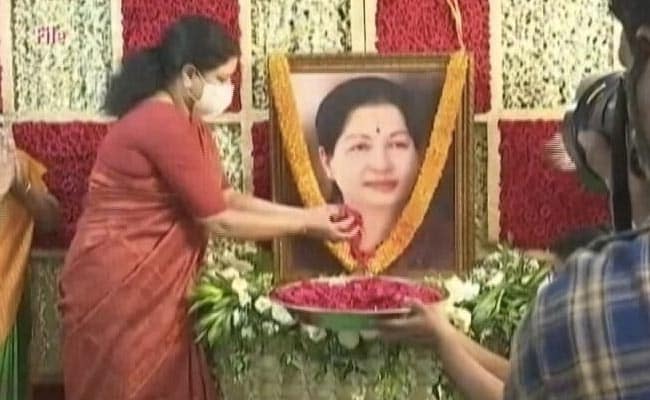 A panel recommended that the state government investigate VK Sasikala and others.

VK Sasikala, a close aide to J Jayalalithaa, has denied the inquiry committee’s allegations that she was responsible for the medical error of the former Tamil Nadu chief minister. In a three-page letter, Ms Sasikala rejected the charges against her by the Arumughaswany Judicial Committee and said Jayalalithaa never needed an angiogram and she did not prevent any move to take her abroad for treatment.

Ms Sasikala announced she was ready to face any investigation, writing that at the time doctors had decided that an angiogram of Jayalalitha, who died in 2016, was not needed. “Jaya and I are a model of friendship. We broke up on purpose to understand the authenticity of a conspiracy to separate us. I joined Jayalalithaa after understanding the context of the plot,” she added.

Earlier on Tuesday, Ms Sasikala’s lawyer told NDTV that she had nothing to do with Jayalalithaa’s treatment.

“There is evidence that it was a collective decision of doctors. The central government sent AIIMS (All India Institute of Medical Sciences) doctors to agree. Nowhere is it said that Ms Sasikala ordered it. You know the law. There should be no assumptions,” Raja Senthura Pandian told NDTV.

He added that none of the witnesses examined said “angiography was interfered… Sasikara interfered. No evidence.” Doctors decided to do an angiography later, he said, and there was evidence.

A single-judge inquiry into Jayalalithaa’s death amid a series of conspiracy theories recommended the state government investigate VK Sasikala and three others – including then health minister Dr Vijayabhaskar and chief secretary.

Justice (retired) Arumughaswamy said they were responsible for mistakes, including not taking her abroad for treatment despite expert advice. Jayalalithaa cardiac perforation, specialists from AIIMS and Dr Richard Beale from UK recommend angiography and treatment abroad.

Mr Pandian also added that the judge who advised the state government to investigate Jayalalithaa’s death went beyond his request to the Supreme Court.

Citing a court order on the matter in November 2021, he said the court had said the committee could not “decide rights or responsibilities, nor any question as to the guilt or innocence of any person”.

The committee could only “give advice to the government” on whether the treatment given to Jayalalithaa was “adequate…based on oral and written evidence”. He added that the Supreme Court also said in its order that it wanted the committee “to limit itself to this frame of reference.” “The Honourable Judge has dropped it,” Mr Pandian said.

The report, presented in August, was shared in the state parliament today by the DMK government. This could have political implications for the opposition AIADMK and its former ministers. The state plans to consult legal experts on next steps, a government order said.