E Palaniswamy (‘EPS’) wants his opponent O Panneerselvam (‘OPS’) not to sit next to him.

Police today detained Opposition Leader Edapaddi K Palaniswami (‘EPS’) and other AIADMK lawmakers for attempting to hold a hunger strike outside Tamil Nadu Parliament The Speaker failed to remove rival faction leader O Panneerselvam (‘OPS’) from the Deputy Opposition The leader’s seat, next to the EPS, is in the house.

The EPS faction, the dominant faction of the two, has chosen a new deputy leader and written several letters asking the OPS to sit elsewhere. The leaders were expelled from the House of Representatives yesterday for disrupting proceedings on the issue.

Speaker M Appavu said he was working on it. “No one can order me to sit in my seat,” he said.

Both EPS and OPS were former chief ministers until their battle became public earlier this year, co-leading AIADMK following the death of J Jayalalitha. Several aspects of their battle are in court, but the EPS faction continues to have a stronger hold.

Yesterday, EPS told reporters outside parliament that the Speaker had failed to comply with AIADMK’s majority decision to elect RB Udayakumar to replace OPS as the party’s deputy leader in the Vidhan Sabha.

“O Panneerselvam (OPS) and his supporters have been removed from the party. It appears that the Speaker is acting on the advice of the ruling DMK,” he said. 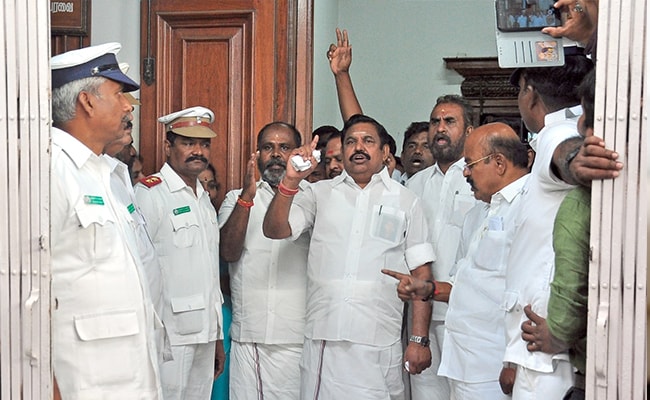 E Palaniswamy or “EPS” and his support MLA after being expelled from the Vidhan Sabha on October 18.

The Speaker is not allowed to have any discussion on the seat during question time, which is dedicated to people’s questions. He told EPS that he would have the opportunity to raise the issue later. But earnings per share remained firm.

A visibly exasperated speaker then said: “I know you’re all here to disrupt the proceedings. It’s not good.”

While AIADMK members were still standing, the Speaker warned them and later directed the bailiffs to expel EPS and his MLA.