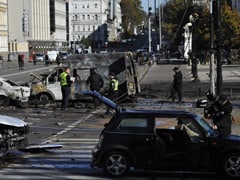 “We reiterate that the escalation of hostilities is not in anyone’s interest,” the foreign ministry said.

India today said it was deeply concerned about the escalation of the conflict in Ukraine and was ready to support efforts to de-escalate the situation, while calling for a resumption of diplomacy. New Delhi reacted on Monday to a massive Russian attack in Ukraine that killed at least 10 people and wounded dozens more.

“India is deeply concerned by the escalation of the conflict in Ukraine, including attacks on infrastructure and civilian deaths,” India’s foreign ministry said in a statement.

The statement added that since the beginning of the conflict, India has maintained that the global order is based on the UN Charter, international law and the principle of respect for the sovereignty and territorial integrity of all countries.

Russia has fired 84 cruise missiles at Ukraine, the Ukrainian military said, two days after a massive explosion damaged a bridge linking Russia and Crimea, and Moscow blamed the attack on Kyiv.

At least five people were killed and more than 50 wounded in Ukraine’s capital, Kyiv, by repeated airstrikes by Russia.

Ukrainian Prime Minister Denys Shmygal said 11 “vital infrastructure” in eight regions and Kyiv had been damaged, and warned that electricity, water and communications would be temporarily cut off.

Last month, Prime Minister Narendra Modi told Putin in Samarkand that “today’s era is not a war”. Many world leaders took the remarks as a public condemnation.

A few weeks later, on October 1, India abstained from voting on a draft UN Security Council resolution condemning Russia’s “illegal referendum” and the annexation of four Ukrainian territories. The government said it was in line with India’s position.