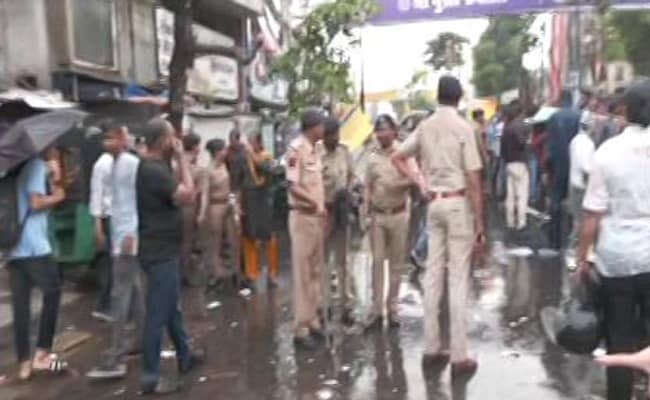 Police at the site of an anti-AAP protest by BJP and “Hindu Diocese” supporters in Vadodara, Gujarat state.

Supporters of Gujarat Vadodara’s ruling BJP protested in Delhi today against the so-called “anti-Hindu” rhetoric of the Aam Aadmi party leader, tearing down AAP banners ahead of a rally between party boss Arvind Kejriwal and Punjab Chief Minister Bhagwant Mann.

The protests and vandalism happened just before 4pm when the AAP planned to hold a ‘Tiranga Yatra’ led by Delhi Chief Minister Kejriwal as part of its election campaign in Prime Minister Narendra Modi’s hometown. The state will hold elections in December.

AAP senior leader Durgesh Pathak tweeted: “This hooliganism shows that the BJP is afraid to fail in Gujarat.”

Protesters point to vows made by Delhi Minister Rajendrapar Gautam at Delhi’s mass conversion to Buddhism, one of thousands who recited BR Ambedkar’s 22 vows, which included condemnation Hindu gods and Brahmin traditions. Viral video footage shows one being repeated by the rally: “I will not believe in Brahma, Vishnu and Maheshwara, nor will I worship them.”

Mr Gautam refused to budge, citing religious freedom and said he was merely repeating the oath of the fabled Dalit leader, who converted to Buddhism at one such event in 1956. The oath includes a commitment to equality and not believing in anyone’s incarnated God.

Protesters in Baroda – some of whom said they were “ordinary, proud Hindus” and “not part of the BJP” – saw the incident as an insult to Hinduism. “That AAP minister (Rajendra Pal Gautam) made thousands of Hindus convert their religion,” claimed a woman who tore up an AAP poster.

The BJP has lodged a police complaint and shared a video of the event on Twitter, accusing the AAP minister of “spraying Hindus”.