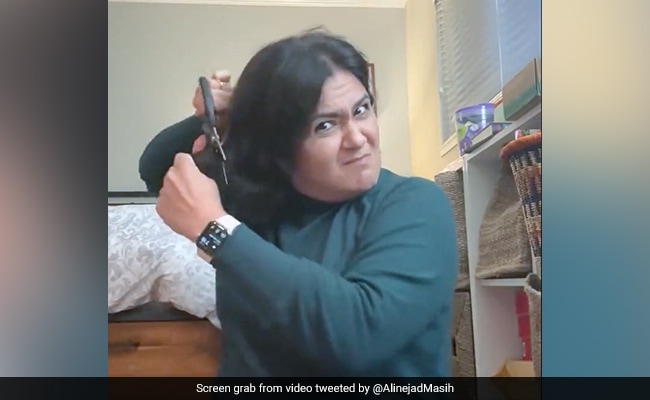 Iranian women cut their hair and light their headscarves in a symbolic protest gesture.

Protests erupted in Iran following the death of 22-year-old woman Mahsa Amini, with Iranian women publicly removing their headscarves and burning them. Ms Amini was arrested by Iran’s “morality police” for wearing a hijab “inappropriately” because she did not fully cover her hair. She died on Friday after falling into a coma following her arrest in Tehran earlier this week, Reuters reported, drawing attention to women’s rights in Iran. Police have denied social media suspicions she was assaulted, saying she became ill while waiting with other detained women.

But videos of some protesters chanting anti-government slogans went viral on social media. In some videos, Iranian troops can be seen using tear gas to disperse demonstrators.

In a symbolic act, some female protesters cut their hair and burned their headscarves in opposition to Iran’s harsh rules requiring women over the age of seven to wear religious hijabs.

Iranian journalist and activist Masih Alinejad tweeted a video and said: “Iranian women express their anger by cutting their hair and burning their headscarves to protest the killing of #Mahsa_Amini by hijab police. From age 7, if we don’t report Our hair, we won’t be able to go to school or get a job. We’re fed up with this gender segregation.”

Iranian women express their anger by cutting hair and burning headscarves in protest over killing #Mahsa_Amini By the hooded police.
From the age of 7, if we don’t cover our hair, we can’t go to school or get a job.We are tired of this gender segregation system pic.twitter.com/nqNSYL8dUb

This is the real Iran, security forces in Iran’s Sakiz open fire on peaceful protesters after burial #Mahsa_Amini.
Several protesters were injured.
The first hijab police officer killed a 22-year-old girl and is now using guns and tear gas against grieving people.#مهسا_امینیpic.twitter.com/IgUdFEnJCS

Social media users have been sharing videos of women taking off their headscarves, who appear to have been severely punished by the ethics police unit.

Do you really want to know how the Iranian morality police killed 22-year-old Mahsa Amini? Watch this video and don’t let anyone normalize the mandatory hijab and ethics police.

The Handmaid’s Tale @Margaret Atwood For us Iranian women, this is not fiction. This is a reality. pic.twitter.com/qRcY0KsnDk

Under Iran’s Sharia, or Sharia law, women must cover their hair and wear long, loose clothing. Violators face public reprimand, fines or arrest. But in recent months, activists have urged women to remove their veils, despite a crackdown on “immorality” by hardline rulers.