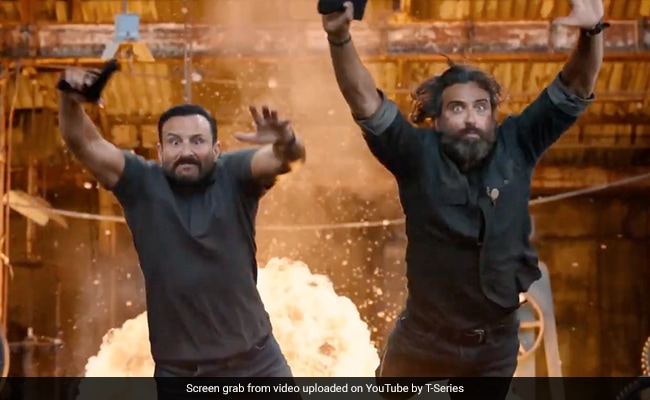 Vikram Veda The trailer is already so worth the wait.It’s not every day we see Hrithik Roshan and Saif Ali Khan go toe-to-toe, that pretty much sums it up Vikram Veda, A Hindi remake of the 2017 Tamil neo-noir action thriller of the same name, starring Madhavan and Vijay Setupathi. Going back to the trailer, it begins with a voiceover, more of a disclaimer that the story won’t be in black and white. There is no good or bad, both have shades of grey. Enter Hrithik Roshan with an unprecedented rugged look and focus, digging some one-liners before doing the job – beating up other bad guys. But again, no one here is really bad.

Hrithik finds a challenger in a tough cop, played by Saif Ali Khan, who defines his goodness by the work he does – that is, encounters. Saif Ali Khan’s concept of good and evil was questioned when he intersected with Hrithik. Radhika Apte also questioned Saif’s tactics, which blurred the lines between good and bad. The final puzzle will be solved when the film hits theaters, and before that, you can check out the trailer and put your foot down on the ultra-intense soundtrack.

Sharing the trailer, Hrithik Roshan wrote: “Your choices define you! Vikram Veda The trailer is out now. “

What you choose defines you! #VikramVedha Trailer Come out now. https://t.co/gPbHy3vCQG

Movie Written and directed by Pushkar-Gayathri, who was also responsible for the original.Set to hit theaters on September 30, the film will clash with Mani Ratnam’s masterpiece Ponyin Selvin.